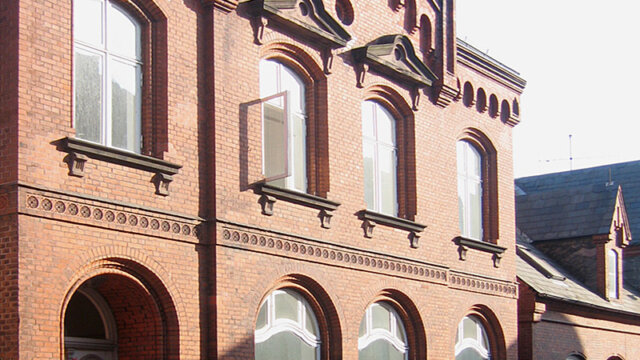 The house Ottestraße 1, which has been the home of the artist’s residency since 1995, was built in 1874 as a bank building in the centre of Eckernförde. It is a classified historical monument.

For many years, the house served as the headquarters of the German Red Cross and was known among the population as a place for blood donations. The front part of today’s exhibition and event room was then used by the Museum of the City of Eckernförde to show the exhibition “Forgotten and Suppressed”, which dealt with the Nazi period in Eckernförde.

This made a conversion of the building necessary. According to the plans of the architects P. Rix and H. Hartjen, Kiel, four studios were set up in the house. Adapted to the structural conditions, they are of different sizes and equipped with a kitchen and a bathroom.

In 2013, the conversion of the exhibition space began. The sanitary facilities were removed and the hall was transformed back into its original shape and size.

A light-filled room was created in which various events take place, especially lectures and readings as well as concerts by the scholarship holders, but also events organised by the Cultural Office of the City of Eckernförde, e.g. during the “Long Nights” in November each year.